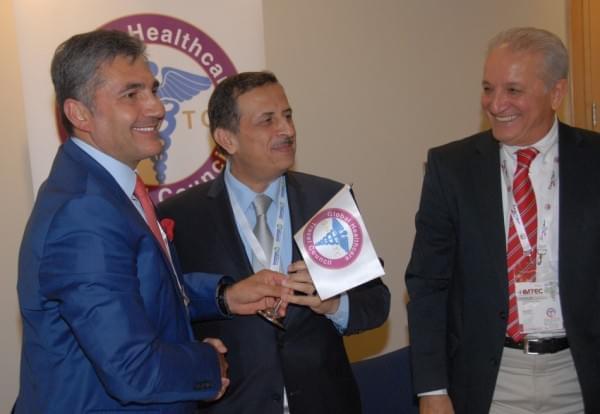 The Sanjiv Malik Lifetime Award is awarded to an individual who, in the opinion of the judges, has made a significant contribution to the development of medical travel and medical tourism over many years. This category is open to medical or non-medical individuals with a minimum of 5 years’ involvement in medical tourism.

Dr. Fawzi Al-Hammouri, Chairman of the Private Hospitals Association of Jordan is a respected healthcare leader and has played a major role in improving the quality of healthcare services in his country. He has been a strong advocate of Jordan as an international medical tourism destination, working with colleagues to establish Jordan as the leading medical tourism destination in the MENA region. Dr. Al-Hammouri was recently elected as the President of the Global Healthcare Travel Council (GHTC), and aims to unite the efforts of all medical tourism destinations and increase awareness. He has a made a positive impact in increasing the cooperation between healthcare providers in the Arab world , leading to a significant increase in patients traveling between Arab countries, and has received the “Pioneer Leadership Award in Healthcare” from the Arab Ministers of Health League and the Arab Hospitals Federation. Dr. Al-Hammouri has represented Jordan at many conferences and events around the globe. He is one of the founders of the “Hakeem Program”; which is the first national e-Health initiative in Jordan to facilitate the transfer of patient records. He strongly believes in social responsibility for serving both local and international communities. In the Arab Spring of 2011, he led the efforts of Jordanian private hospitals to assist more than 100,000 patients from Libya, Yemen and Syria, without financial guarantees. He is one of the founders of “Operation Smile-Jordan”; which brings volunteers from all over the world to carry out pro bono surgery for hundreds of needy children who suffer from cleft lip and cleft palate from Jordan, Palestine, Iraq, and Yemen. He has demonstrated through his actions his significant contribution to the development of medical travel and medical tourism over many years in the MENA region.

This post has been written by Global Healthcare Travel Council and viewed 5131 times.